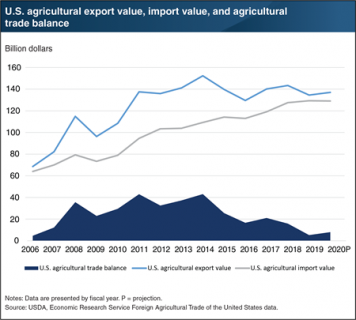 The $5.2 billion surplus projected for FY 2019 is the lowest since FY 2006, when the U.S. exported $4.6 billion more in agricultural goods than it imported. Unlike overall U.S. trade in goods and services, U.S. trade in the agricultural sector consistently runs at a surplus.

Although agricultural exports have increased in value since 2016, the value of imports has risen at a slightly faster rate, leading to a declining trade balance.

Compared to the previous Outlook for Agricultural Trade forecasts in May 2019, exports were revised downward by $2.5 billion while imports were raised by $0.3 billion. The decline in expected export value was primarily due to lowered expectations for corn and soybean exports.

This chart is drawn from data discussed in the ERS quarterly Outlook for U.S. Agricultural Trade, released in August 2019

Planting Corn Through May Still has Solid Yield Potential