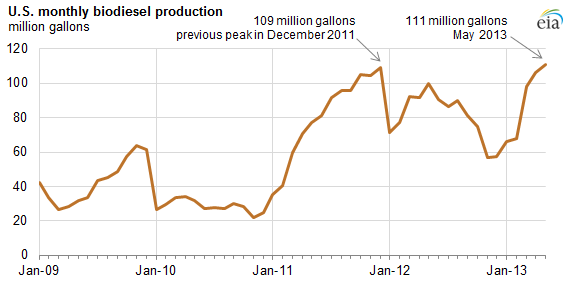 U.S. biodiesel production in May 2013 reached a record level of 111 million gallons, according to data released by the U.S. Energy Information Administration (EIA) on July 30.

The use of biodiesel as a motor fuel is supported by federal mandates for biodiesel blending under the Renewable Fuel Standard program. Under this program, the U.S. Environmental Protection Agency sets annual targets for the use of biodiesel and other biofuel categories, such as advanced and total biofuels, which can also be satisfied through additional biodiesel use. Biodiesel blenders are also currently eligible for a federal tax credit of $1 per gallon blended.

Most biodiesel fuel is blended with diesel fuel derived from petroleum and is used in the transportation sector. Biodiesel accounted for less than 2% of U.S. distillate fuel oil product supplied (used as a proxy for consumption) of 3.9 million barrels per day during the first five months of 2013.

USDA to Begin Payments for Producers Impacted by 2018, 2019 Natural Disasters