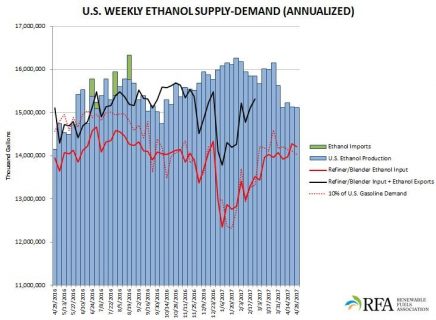 Contrary to most expectations, stocks of ethanol diminished only slightly from last week. Stocks decreased just 0.4% to 23.2 million barrels, 7.4% higher than year-ago levels.

Imports of ethanol were nonexistent for the 36th straight week.

Average weekly gasoline demand stood at 384.6 million gallons (9.156 million barrels) daily. Refiner/blender input of ethanol decreased 0.5% to 927,000 b/d. Still, the implied ethanol blend rate in gasoline supplied to the market was 10.12%, the eighth time this year (17 weeks) that the 10% threshold has been exceeded (compared to zero times during the same period last year).

Expressed as a percentage of daily gasoline demand, daily ethanol production was 10.77%, a full percentage point higher than one year ago.