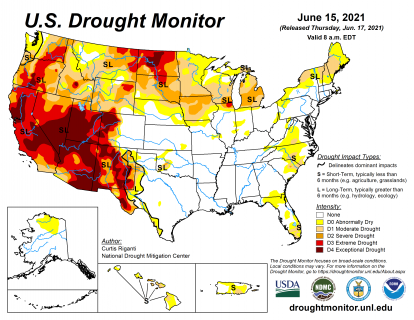 The latest U.S. Drought Monitor update Thursday shows widespread drought conditions across roughly half of the United States. Warmer than normal temperatures continued their hold on the northern tier of the Lower 48, particularly in the northern Great Plains and Upper Midwest.

Across the north, widespread degradation of drought conditions occurred in areas where heavy rainfall missed. A few areas that received heavy precipitation and saw localized improvements were coastal Oregon and Washington, western Montana, and eastern Montana and western North Dakota.

The most severe drought ratings are found in the West region and North Dakota. For the Drought Monitor’s West region, which covers nine states, the update classifies 55 percent of the region in extreme drought and 26 percent in exceptional drought, the most severe category.

The drought extends through northern High Plains states and the upper Midwest to the Great Lakes. With some droughts indicated on the East Coast, the rest of the U.S. is largely free from drought.