US ‘It’ in Game of Tariff Tag After China Retaliates

President Trump upped the ante on Monday when he announced additional tariffs on $200 billion of Chinese goods, escalating the trade war. The tariffs will take effect on Monday and be set at 10%. If no agreement is in place by the end of the year, those tariffs will jump to 25%. 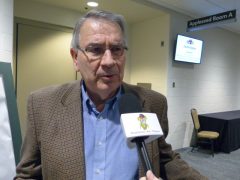 Purdue ag economist Dr. Chris Hurt says this is a high-risk strategy that could come with huge rewards if successful, but it’s tough to predict what China will do. He believes they have much to gain from negotiating, but adds, “They don’t appreciate being pushed around. They probably could be very willing to stay with this trade war for the long run. The long run- could that be multiple years? I think those are the questions we have to address.”

Hurt says that if President Trump’s strategy is successful, “What we’re looking at is not just a small amount, but maybe 30-40 percent more ag goods; a substantial increase. In the long run, it really could provide much better marketing opportunities for our huge productive capacity of US agriculture. The problem is, it may not go that way.”

I asked Hurt for his best guess on when he believes this trade war could come to a close.

“Our thoughts are that it could be next spring or into the early summer before we really get some positive movement in a direction that’s going to help agriculture.”

Chief Commodities Economist Arlan Suderman with INTL FCStone has made his position clear that he believes China is hoping that this trade war will hurt Trump politically and won’t begin serious negotiations until after the mid-term elections.

“But if we do not have an agreement by January, I think that means that China is going to try to ride it out to the next presidential election. I think that’s one reason why President Trump said if we don’t have an agreement then the tariff on this $200 billion in products goes from 10% to 25% on January 1.”

Trump said that, “if China takes retaliatory action against our farmers or other industries, we will immediately pursue phase three, which is tariffs on approximately $267 billion of additional imports.” China did just that, announcing tariffs on $60 billion of US goods. If Trump follows through on the additional tariffs, Hurt says that will put the total above $500 billion; which is everything that China exports to the US.