No Perdue vote before Easter 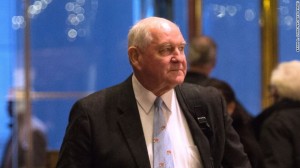 “It’s frustrating because here once again agriculture, which typically is the least partisan in terms of party politics anyway, in terms of the programs that operate, and here we are almost or getting close to four months in to President Trump’s administration and we still don’t have a Secretary of Agriculture.”

The Senate could have made quick work of the Perdue nomination this week, but that would have taken a bipartisan time agreement, or unanimous consent of all 100-senators to consider Perdue in tandem with Supreme Court nominee Neil Gorsuch.

Judiciary Chair and Ag member Chuck Grassley on the Majority Leader’s skipping Perdue until after Easter.

That became obvious last week when New York Democrat Kirsten Gillibrand broke ranks with fellow Democrats on the Senate Agriculture Committee and voted ‘no’ on Perdue, signaling Democrats’ intent to make no floor concessions, even for someone with strong bipartisan and farm support.

Grassley had predicted Gorsuch might precede Perdue—not a good outcome if Republicans change Senate rules this week to overcome a Democratic filibuster of Gorsuch, but in the process, create an even more bitter political climate.

The Atlanta Journal-Constitution writes Perdue will likely need to wait until late April or even early May to take his post at the Department of Agriculture. That’s because when Senators return after recess, they will have five workdays to fend off a partial government shutdown.