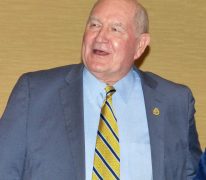 USDA is withdrawing its proposed revisions of regulations involving review and approval of new biotech crops. Those revisions were published at the beginning of the year. It was back in 2014 that USDA said they were beginning a process to revise and streamline the rules that cover how new biotech crops are reviewed for safety and approved for use. The most recent review had been back in 1987.

In April of this year, USDA Secretary Sonny Perdue said, “We are right now at USDA categorizing all the regulations and we’re going to look at removing some of those and changing some of those.”

With this week’s announcement, Perdue says the agency will re-engage with stakeholders to find the best way forward. He says the objective is to provide an efficient and transparent review process that does not restrict innovation.

“It’s critical that our regulatory requirements foster public confidence and empower American agriculture while also providing industry with an efficient and transparent review process that doesn’t restrict innovation,” Secretary Perdue said. “To ensure we effectively balance the two, we need to take a fresh look, explore policy alternatives, and continue the dialogue with all interested stakeholders, both domestic and international.”

“The National Corn Growers Association is encouraged by today’s announcement and applauds USDA’s reconsideration of the proposed rule,” said NCGA President and North Dakota Farmer Kevin Skunes. “The proposed rule had desirable elements, but the deficiencies found in key areas would have rendered the overall product unworkable for innovation and America’s farm families.”

The National Association of Wheat Growers was pleased with the news as well. “We applaud USDA for its efforts to update its regulatory system and support its move to withdraw the proposed rule to revise the Agency’s biotechnology regulations,” said CEO Chandler Goule.