The USDA planted acreage and stocks reports on Friday were bearish, but the market reaction was bullish.  Dr. Chris Hurt, ag economist at Purdue, said the planted acre number for soybeans was higher, but not as high as the trade expected, “I really expected we would see more soybeans planted than corn planted this year, but that is not what we got.”   The report showed soybean planted area for 2017 estimated at a record high 89.5 million acres, up 7 percent from last year; while corn planted area for all purposes in 2017 is estimated at 90.9 million acres, down 3 percent from last year.

As a result, Hurt says soybean prices will remain higher this summer which is an opportunity for farmers, “This would be an opportunity to sell soybeans at higher levels than we are likely to see at harvest.” Hurt told HAT that U.S. soybean production looks to be on track to average yields, “Thus, I would expect soybean prices to be around $8.75 per bushel at harvest.” On Friday, November futures closed at $9.54. 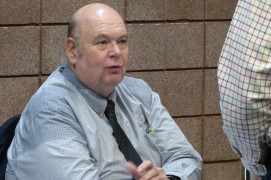 Bob Utterback, with Utterback Marketing, says corn prices will also remain higher in the short term based on dryness in the Western Corn Belt. But again, it is a situation that is not going to last long, “In the next 3 weeks we are going to see corn from Brazil hit the market and that is going to widen the cash bases.” He said that, thus, while the futures will continue to rally, farmers selling into the cash market will get less. 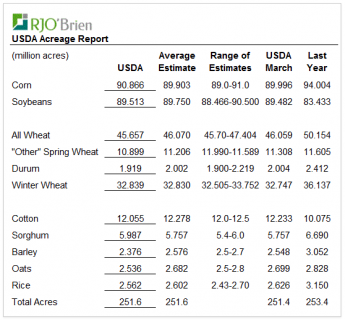 USDA put all wheat acres at 45.7 million, which was at the bottom of trader forecasts in a Reuters survey. Soybean acres at 89.5 million were under the trade average but within the range, but the June 1 stocks of 963 million were on the low side of estimates. On Friday, wheat prices jumped sharply.  Hoosier wheat growers who are in the midst of harvest saw the value of their crop increase last week by $1 per bushel.