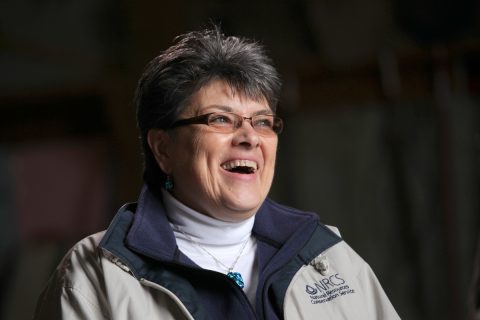 Greenfield resident and former USDA Natural Resources Conservation Service State Conservationist Jane Hardisty is a recent recipient of one of Indiana’s top honors – the Sagamore of the Wabash.

This prestigious award from Governor Eric J. Holcomb was presented at Hardisty’s retirement dinner on February 23 by Indiana State Department of Agriculture Deputy Director Melissa Rekeweg and Division of Soil Conservation Director Jordan Seger to recognize her outstanding leadership in agriculture and conservation and over 43 years of public service.

Kevin Wickey, NRCS Regional Conservationist and Hardisty’s former supervisor spoke at the dinner saying it was “impossible to sum up all the accomplishments of a career like that of Hardisty’s,” but gave a few highlights of the past 17 years as head of the Indiana NRCS.

Under Hardisty’s leadership, nearly $1 billion in financial and technical assistance was directed to Hoosier farmers and other landowners that helped install over 500,000 conservation practices to address natural resource issues, such as erosion, flooding, and invasive plants on over 17 million acres of farmland.  That adds up to tremendous benefits for protecting and improving our drinking water, air quality, cropland, wildlife habitat, grazing lands and forestlands.  Hardisty leveraged over $36 million in disaster recovery, helping communities repair streams, dams, bridges and roads after natural disasters.  In addition to working lands conservation efforts, NRCS has protected nearly 80,000 acres of wetlands, floodplains, grasslands and forests through conservation easements and is working with landowners to restore them for generations to come.

Because of Hardisty and many conservation partners, Indiana is leading the nation in soil health management systems, resulting in healthy soil that reduces erosion, requires less nutrient inputs, manages the effects of flood and drought, and reduces nutrient and sediment loading to streams and rivers. Hardisty was also instrumental in protecting several nature preserves and wildlife areas like Goose Pond Fish and Wildlife Area in Greene County, Kankakee Sands Preserve near Morocco and Eagle Marsh Nature Preserve near Ft. Wayne, all available throughout the year for thousands of bird watchers, wildflower enthusiasts, hunters, fisherman, and hikers.

The Sagamore is an honorary award created by the State of Indiana during the term of Governor Ralph F. Gates in the mid-1940s.  Among those who have received Sagamores have been astronauts, presidents, ambassadors, artists, musicians, politicians and citizens who have contributed greatly to our “Hoosier” heritage.