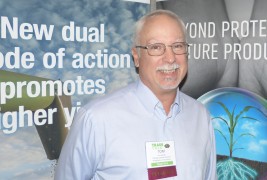 Good disease control by Indiana farmers led to definitive yield advantages in 2016. Disease management varies from year to year as conditions for disease development vary, but as you look forward to next year and what your strategy might be, think about the disease triangle to help you make decisions.

Tom Quade is a Technical Manager with FMC. He says the first part of the triangle is determining if you have a crop you want to protect.

“The second part of the triangle is a disease organism is present in the area, and you want to catch it on the early side of disease development, or preferably just prior to disease development,” Quade told HAT. “The other part of the triangle, when a fungicide really pays off, is when conditions are favorable for disease to explode. Typically, that’s prolonged wet conditions where the leaf surfaces are wet. Most disease organisms require a wet leaf surface for at least eight hours for them to penetrate the cuticle of the leaf and start the disease cycle.”

Fungicide use is critical if all three sides of the triangle come together. FMC is a newer player in fungicides, but Quade said the results with their dual modes of action fungicide this year were impressive. Preemptor is for corn and soybeans, and Quade tracked the yield bump in wheat this year.

“The top yielding treatments in my research were two applications, one at tillering stage and another at flag leaf. Just a single flag leaf application of ordinary fungicide was returning ten bushels or better, and that’s great, but where we sprayed twice where stripe rust was present we returned better than twenty bushels using Preemptor. Stripe rust is a very serious disease when it comes.”