Eric and Megan Scheller of Vanderburgh County and Aaron and Lacey Sheller of Hamilton County are the winners of two of Indiana Farm Bureau’s top awards for Young Farmers & Ag Professionals in 2019, the Excellence in Agriculture Award and the Achievement Award.

Two distinguished panels of judges evaluated this year’s participants. Excellence in Agriculture candidates were judged on their involvement in agriculture, leadership ability, and involvement and participation in Farm Bureau and other organizations, while the Achievement Award candidates were judged on their leadership abilities and on what they have achieved with their farms.

Winners and finalists will be formally recognized at the INFB state convention this December in French Lick. Learn more about this year’s winners below. 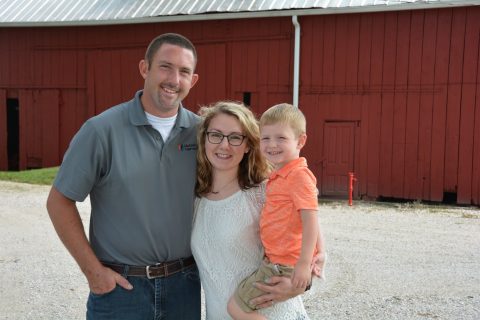 The Schellers have devoted themselves to serving their local community. Eric grew up on the family farm, where he spent much of his time helping his father with their row crops and participating in FFA. His passion for agriculture remains strong today as he continues to work on the family farm. Eric also works as a diesel technology instructor and has a degree in diesel equipment technology. Megan serves their rural community as a nurse and is currently working toward a master’s degree in nursing. Megan also spends much of her time outside of work on the farm where she helps prepare equipment, does grounds keeping and provides meals. The two also are active in Farm Bureau, serving on the county Farm Bureau board and attending many state Young Farmers & Ag Professionals and leadership events.

Click here to see a video of the Scheller family. 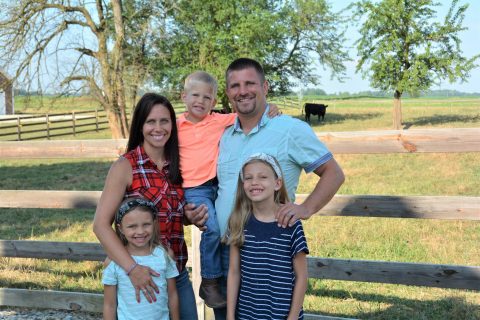 Aaron and Lacey Sheller, Hamilton County
The Shellers have farming in their blood – Aaron as a seventh-generation farmer and Lacey as a sixth-generation farmer. Together they now farm non-GMO waxy corn, seed soybeans, cattle and swine. After the unexpected death of his father in 2004, Aaron assumed management of the family farm and later earned his bachelor’s degree in accounting and management. Lacey now works full-time on the family farm with a special emphasis on freezer beef and pork sales and distribution. She has a bachelor’s degree in athletic training and was previously employed at the county hospital as an exercise specialist. Lacey and Aaron also formed an LLC in 2007 to sell seed and liquid fertilizer to several local farms. The Shellers are active in their county Farm Bureau and Aaron currently serves as the Young Farmers & Ag Professionals chair for Hamilton County.

Click here to see a video of the Sheller family.