Variable Rate Seeding Can Boost Yield and Save Money 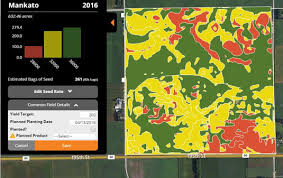 As corn and soybean growers look to increase yields and cut costs, variable rate seeding can help. Variable rate seeding is becoming more popular. Brian Early, with DuPont Pioneer, says research has shown it can improve corn yields, “Where we are seeing success in corn is when we put higher populations on our productive ground. Those fields can handle the higher populations and will pay you back with higher yields. Then we reduce populations on our poor ground.” He said, in the end, you are not using any more seed but just allocating it differently. This will result in more overall production with no more expense.

Early says the opposite strategy works for soybeans, “We have seen consistent gains in soybeans by putting higher populations on the stressor soils or the sandy soils and cut back on the population on the black soil.”

Programs like Encirca by DuPont Pioneer can make the practice easier and more accurate “A lot of variable rate seeding in the past has been done by soil type, but some of those maps are 40 years out of date,” said Early. He told HAT that DuPont Pioneer has worked with the University of Missouri to update the soil maps in the Encirca system so they are more accurate, “If you have yield information with us we can overlay that on the soil map and give you predacity zones. So we can customize it about anyway you want.” Early says the system can also be customized to fit your planter type.

For more information about Encirca, contact your DuPont Pioneer or Encirca services professional.