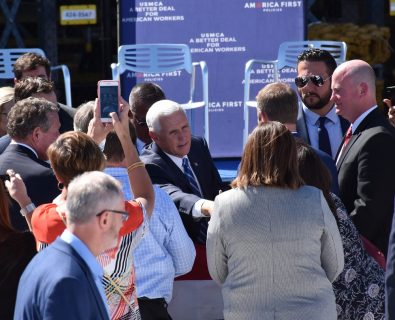 Vice President Mike Pence is back home again in Indiana and was the featured guest Thursday at MacAllister Machinery in the southeast corner of Indianapolis. The U.S. Mexico Canada Trade Agreement was the target of the event, first by a panel discussion, then by Indiana Lt. Governor Suzanne Crouch just before she introduced the Vice President.

“We just need Congress to quit bickering and get it done!” she said. 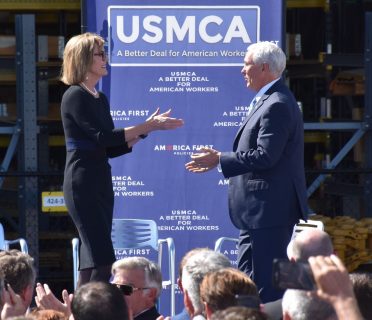 Vice President Pence offered statistics outlining how the U.S. and specifically Indiana have a lot to gain by passing the trade agreement with its neighbors.

“According to the National Association of Manufacturers, Canada and Mexico purchase one-fifth of America’s manufacturing products. That’s amazing,” he told the crowd of roughly 300. “And the buy more American products than any of our next ten trading partners. It isn’t that they live just next door, it’s that they are a critical destination for what we grow and what we make. In fact, more than 2 million American manufacturing jobs actually depend on trade with Mexico and Canada, including 61,000 jobs right here in the Hoosier state.”

Agriculture sectors were represented in the audience, and after the event Indiana Pork’s Jeannette Merritt told HAT the state’s pork farmers are in full support of USMCA.

“It is important that we have the opportunity to have fair and open trade opportunities,” she said. “Mexico and Canada are vital to pork trade in the United States, with Mexico our second biggest importer of U.S. pork, and Canada is 4th. So, those markets are very important to us.”

The sticking point for USMCA? It hasn’t been brought to a vote in the U.S. House of Representatives. Pence says Hoosiers really don’t need to contact Republicans representing the state in Washington. 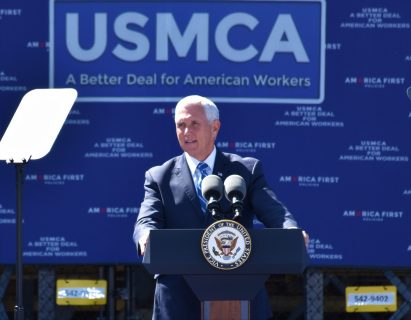 “Because they’re all there, they’re all on board. They know what trade means to Indiana. Trade means jobs in Indiana and that’s what the USMCA is going to mean. But, I always had the view when I was a member of Congress that you represent everybody in Indiana in Washington, so if you have a minute you might just call Congressman Andre Carson and Congressman Pete Visclosky and tell them to get off the dime! Support the USMCA, for Indiana and America.

The trade policy event was one in a series put on by America First Policies.

Hear both Crouch and Pence here:VP-Mike-Pence-address-at-MacAllister-Machinery