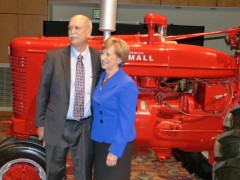 Hoosiers headed for the American Farm Bureau annual convention in Orlando are encouraged to kick off their stay with a show of support for presidential candidate Don Villwock during the candidate forum at 4 PM Saturday in the exhibit hall. Bob White with Indiana Farm Bureau, who has been alongside Villwock during much of his campaigning across the country, told HAT the forum will be extremely important.

“A lot of members come in on Sunday but there’s also quite a few of them there on Saturday, and that will be their first listen and see at Don Villwock the candidate. Don has met many, many folks over the years being on the AFBF board, so he knows quite a few people, but some of the delegates that will be there will have their first time to see Don. So it’s important, very important.”

The campaigning will continue during the convention right up to the delegate session Tuesday when the election will be conducted.

“Sunday and Monday he’s going to be in and out of the Indiana booth and talking to delegates and talking to members,” White said. “It’s all about the members for Don and the state Farm Bureau’s, because if they’re not strong, then AFBF isn’t strong.”

Again during the delegate session all 4 candidates will address the full body prior to their vote which comes sometime Tuesday afternoon. White said he and Villwock feel good about Don’s chance to win, but “we’re all a bit nervous. I mean elections are elections and the crystal ball is always foggy, but Don feels confident that he’s got the best background and knowledge and the leadership ability and that he’s the best person for the job. So do I and so does the Hoosier delegation and the more we can get that out, the better off we’ll be. But you’re never sure until the actual vote is taken.”