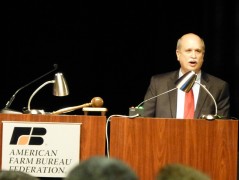 Zippy Duvall of Georgia is the new president of the American Farm Bureau Federation. Tuesday’s election at the conclusion of the annual meeting in Orlando also means the end of the road for Don Villwock from Knox County, Indiana, who was defeated on the third and final ballot. 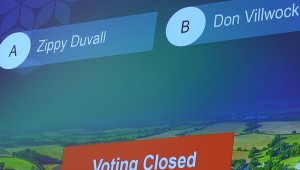 “Of course I’m disappointed,” he told HAT. “A lot of my friends and all the Indiana delegation, they did a great job. I just feel like I let them down. But life goes on and Zippy’s a great Christian man. I’m very glad that he is elected. He’ll do extremely well and I’ll try to help him any way I can.”

The election brings to a close a long and very successful career in Farm Bureau but Villwock will remain a member as he returns to life on the farm.

“I sure will and I truly believe in Farm Bureau. I think every farmer in Indiana needs to be a member. They need someone fighting for them at the courthouse or the statehouse or Washington DC, because if they become members we get more things accomplished that make a difference. It’s a pretty good deal for $32.50.

Villwock said there is a distinct positive that comes from not winning.

“I’ll be able to watch my grandchildren grow up and that’s a pretty important job.”