The Trump team finally has an agriculture secretary nominee, and it’s a name that came up often during the transition. Former Georgia Governor Sonny Perdue is the pick, and the selection of a man who was raised on a row crop farm is pleasing the major ag groups across the country. Former Indiana Farm Bureau president Don Villwock has not met Perdue, but knows a lot about him now and thinks it is a good choice. 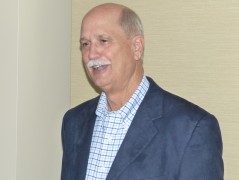 “A lot of my friends across the country know him and have worked with him. Zippy Duvall, our AFBF is from Georgia and knows him, has worked with him, and we had a conversation about him early on when he was mentioned. So I do think the ag community will be happy, especially someone that comes from a farm. He’s a veterinarian and I think that speaks well to his intellect, that he is a pretty talented individual, and then his agribusiness background.”

That agribusiness background is in exporting, and Villwock says that “really satisfies our need to have some who understands how important trade is. Also, the Secretary of Commerce (nominee Wilbur Ross) made some very positive trade statements I thought, so hopefully I think their comments reflect that we get probably better trade deals. I always think in agriculture we always think we can get a better trade deal than what we’ve negotiated.”

Villwock’s name was mentioned early on in national political discussions as one of the possible ag secretary choices. But the call to Trump Tower never came. Farmer Don is just fine with that.

“It was an honor to mentioned on the list,” he told HAT. “I think a lot of that was because I had such a great working relationship with Vice President Pence, and because Trump had said that he’s going to delegate much of the agriculture responsibilities to Vice President Pence. I think that’s probably why my name surfaced early, but I’m completely happy being here in Indiana and being Farmer Don, and actually getting to be a fulltime grandpa is a pretty good deal.”

Perdue served as a Georgia state senator for a decade and then moved in as governor from 2003-2011. He, like Villwock, was a member of the Trump agricultural advisory committee.

Early Yield Results From Northern Indiana ‘All Over the Map’