Field activity briefly picked up last week during a span of warm, dry weather before mid- to late-week rains soaked fields once again, according to Greg Matli, Indiana State Statistician for the USDA’s National Agricultural Statistics Service. Warm temperatures started to dry out saturated fields, but soil moisture levels moved back above the five-year average after rain events later in the week. The average temperature for the week was 54.3 degrees Fahrenheit, 5.3 degrees above normal for the State. The amount of rainfall varied from 0.29 inches to 2.25 inches over the week. The statewide average precipitation was 1.50 inches. There were 2.4 days suitable for fieldwork for the week ending April 14.

Winter wheat continued to green up throughout the State, with the percent jointing slightly above last year. Corn planted was in line with the five-year average, with reports of the first fields being planted in the central and southern parts of the State. Livestock were reported to be in good condition, benefiting from the drier conditions, with calving reported to be going well. Other activities for the week included spreading dry fertilizer and manure, applying anhydrous ammonia, spring tillage, repairing and installing tile, and preparing machinery for fieldwork. 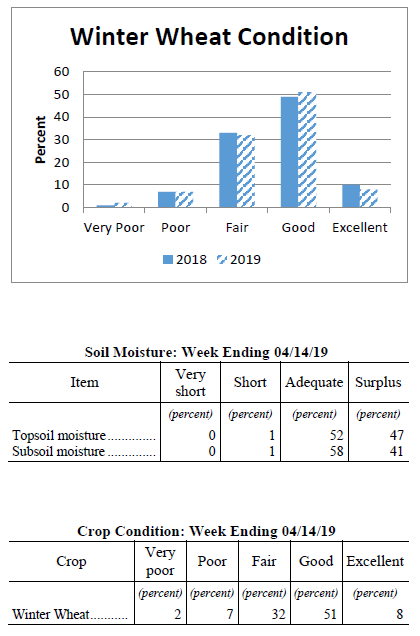 Great Northeast Indiana Yields, but Waiting to Get Back to Harvest