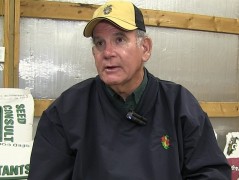 This year will always be linked to water for Midwest farmers. There was too much in the spring and then a water shutoff for many in the summer of 2015. Both factors contributed to lower yields, but the start in Indiana was too much to overcome for many crops, according to agronomist Bill Mullen.

“There’s nothing we can do when that much water comes at one time,” Mullen told HAT in his latest video. “Now we had some breaks in there when we were able to put our nitrogen down, especially sidedress. We had some issues even though with the UAN it was stabilized with that much water. You can never go ahead and protect that much nitrogen. We lost nitrogen. We didn’t seem to have an issue at pollination time. There wasn’t much tip back. The ears were filled out but they were smaller ears. And everyone knows we need nitrogen for grain filling.”

“Early on it affected our stand and besides affecting the stand, it affected the corn plant itself. We had a lot of crown rot this year. The saturated, water logged conditions really affected the base of the plant. We saw some disease come through and the roots were also hurt. And it affected the yield.”

Now with harvest complete for most farmers, fall field work continues and some are tilling where they normally wouldn’t because of all the compacted soils from the heavy rains. Mullen says there is another method to improving the soil that’s becoming more common, and that’s the use of cover crops.

“What we’re trying to do is improve the soil tilth,” he said. “At the same time while we’re trying to raise 250-300 bushel corn and 70-90 bushel soybeans, that’s our yield potential, we also need to take care of the soil. Cover crops is a means of doing it. Rye is very good. The big thing with cover crops is I tell people don’t do every farm. Try one field a year or two fields a year.”

Bill Mullen is Director of Agronomic Services for Seed Consultants. Get more of his 2015 review in the HAT video.