Wet and cold weather conditions slowed harvest progress, according to Greg Matli, Indiana State Statistician for the USDA’s National Agricultural Statistics Service. Temperatures dropped significantly from the previous week. There were reports of frost on Thursday, and periods of light snow were mixed with rain showers late in the week. The statewide average temperature was 44.9 degrees, 6.3 degrees below normal. Statewide precipitation was 1.48 inches, above average by 0.95 inches. There were 3.7 days available for fieldwork for the week ending October 29, down 2.4 days from the previous week. 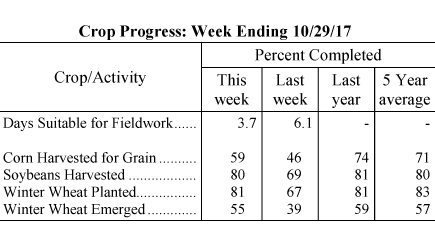 As a result of dry conditions before the rain, harvest was not delayed for long. Soybean harvest is winding down with some reports of completion. Farmers have shifted their focus to corn with the majority of soybeans already harvested. Despite lower than normal temperatures, recent rainfall has helped promote growth of winter wheat, and cover crops. Pastures have also benefited from the rain but there have been reports of dormancy due to unseasonably cool weather. Livestock are reported in good condition. Other activities for the week included drying and hauling grain to elevators, application of lime and manure, and fall tillage.