2017 has been a year of unusual weather, a trend that continues. Over the weekend, we had high winds, heavy rain, and big temperature swings which is taking a toll on this year’s harvest. Around the state there were reports of barns and grain storage systems being damaged by the high winds, and the heavy rains will stall the harvest for several days.

Lance Shepard, with DuPont Pioneer, says this unusual fall weather is taking its toll on what were some promising yields, “This weather is going to cause some standability issues in this year’s corn.” He told HAT that the higher than average yields mean the plants cannibalized the stalks to finish the ears, “That is causing stalk weakness; and, with the strong winds, we are seeing a lot of corn going down.” 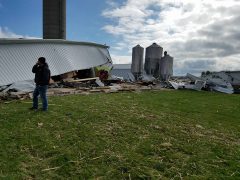 Shepard says not only is the corn being impacted but also the soybeans that are still in the field, “With the big swings in temperatures and the wetness, we are seeing a lot of shattering losses in the soybeans.”

Shepard’s recommendation is to check your fields and make your plans for the remainder of harvest. Listen to the complete DuPont Pioneer Harvest Update under the agronomy tab on this web site.