According to EIA data, ethanol production averaged 1.002 million barrels per day (b/d)—or 42.08 million gallons daily. That is down 9,000 b/d from the week before. The four-week average for ethanol production decreased to 1.012 million b/d for an annualized rate of 15.51 billion gallons.Stocks of ethanol were 20.9 million barrels. That is a 2.8% decrease from last week and the lowest levels of ending stocks since the first week of the year. Imports of ethanol were 38,000 b/d, the first time in 12 weeks that import volumes were recorded.

Average weekly gasoline demand increased 0.2% to a new all-time record of 413.4 million gallons (9.842 million barrels) daily. This is equivalent to 150.9 billion gallons annualized and is 0.9% higher than year-ago levels.

Refiner/blender input of ethanol increased 0.6% to 951,000 b/d, a five-week high and equivalent to 14.58 billion gallons annualized.

Expressed as a percentage of daily gasoline demand, daily ethanol production decreased to 10.18%. 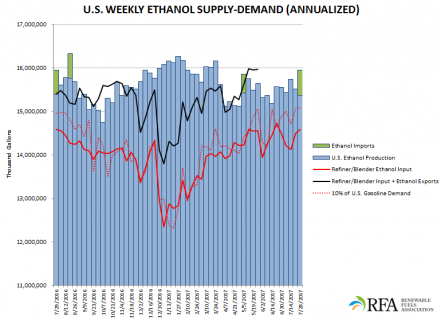