According to EIA data, ethanol production averaged 975,000 barrels per day (b/d)—or 40.95 million gallons daily. That is down 7,000 b/d from the week before. The four-week average for ethanol production stood at 968,000 b/d for an annualized rate of 14.84 billion gallons. Stocks of ethanol stood at 19.2 million barrels. That is a 2.1% increase from last week and the highest in 15 weeks. Imports of ethanol were nonexistent for the first time in three weeks.

Gasoline demand for the week averaged 380.3 million gallons (9.054 million barrels) daily. Refiner/blender input of ethanol averaged 870,000 b/d. Expressed as a percentage of daily gasoline demand, daily ethanol production was 10.77%, the highest rate since the end of May. 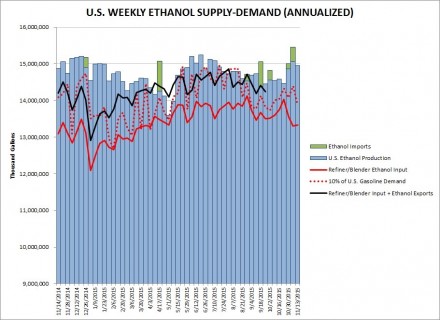