According to EIA data, ethanol production averaged 1.044 million barrels per day (b/d)—or 43.85 million gallons daily. That is down 1,000 b/d from the week before, but the 21st straight week over 1 million b/d. The four-week average for ethanol production increased to 1.037 million b/d for an annualized rate of 15.9 billion gallons.
Stocks of ethanol stood at 22.6 million barrels, the lowest in five weeks. That is a 0.9% decrease from last week and the third consecutive weekly decrease.
Imports of ethanol were nonexistent for the 29th straight week.

Gasoline demand for the week averaged 386.4 million gallons (9.2 million barrels) daily. Refiner/blender input of ethanol averaged 915,000 b/d. Year-to-date gasoline consumption is running 3.6% below the same period in 2016, but year-to-date ethanol blending is up 1% over the same period last year.

Expressed as a percentage of daily gasoline demand, daily ethanol production was 11.35%. 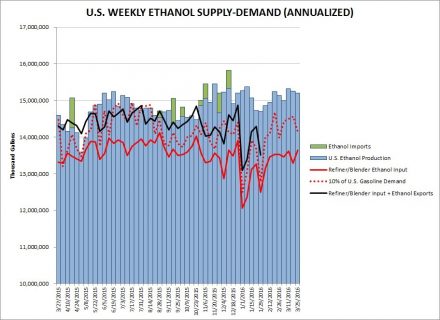