According to EIA data analyzed by the Renewable Fuels Association, ethanol production averaged 1.028 million barrels per day (b/d)—or 43.18 million gallons daily. That is down just a hair from last week’s record-tying 1.029 million b/d. The four-week average for ethanol production stood at 1.020 million b/d for an annualized rate of 15.64 billion gallons. For the first time in history, production has topped the 1 million b/d mark in four straight weeks. Stocks of ethanol stood at 20.8 million barrels. That is a 1.9% increase from last week and a five-week high. Imports of ethanol were 37,000 b/d, up from zero last week and the highest rate of the year.

Expressed as a percentage of daily gasoline demand, daily ethanol production was 10.64%, up from last week and a 21-week high. 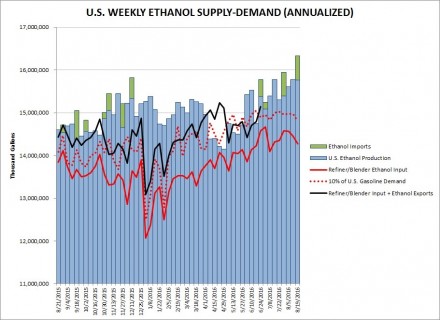