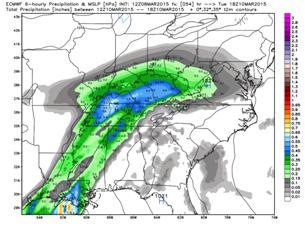 A warm up continues this week with plenty of southerly wind flow. There is more moisture in over the lower Mississippi valley to start the week, and we are making a few adjustments to our Indiana forecast to allow some of that moisture to work into the state on a couple of occasions. Still, there will be a big chunk of the state that stays dry through at least Thursday, allowing moisture that develops from snow melt to be easily used and soak into the soil profile.

The first shot of moisture for the week makes it no farther north than I-70 and will be in for Tuesday. We like rain totals of up to a quarter of an inch in most locations south of 70, and closer to the OH river, we may have to bump those totals to closer to .4”. Coverage will be around 70% over the southern half of the state. Nothing farther north, although we may have to watch for some clouds to push in from the action to the south. Temps stay well above normal. 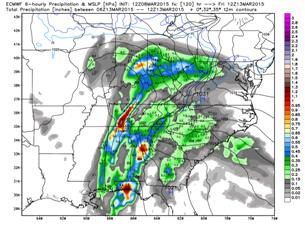 The next chance of precipitation comes late in the week, for Thursday night through Friday. This moisture has a better chance to push farther north, but will have a spottier coverage at 60%. Rain totals will be in the .15” to .75” range, with the heavier totals over the eastern half of the state from US 24 southward. This system will bring in some cooler air for the following weekend.

Speaking of temperatures, we look for most of the week to be above normal this week, by an average of 5-15 degrees. Next week temps pull back closer to normal, even a bit below, but will not fall anywhere near levels we saw last week.

Models are hinting at another large scale system coming out of the central plains next Wednesday, moving toward the Corn Belt and hitting the Hoosier state late next week. This system likely brings some rains, perhaps up to half an inch, and temps that push back to below normal for next weekend (21st-22nd)

Mostly dry weather to start this week in Argentina. A front develops late this afternoon and tomorrow over central and southern parts of the country, but falls apart before really reaching major ag areas. A stronger front still holds together for late Thursday night through the weekend. This front brings .25”-1” rains to 80% of ag areas in Argentina. Dry then for most of next week.

Moisture parks over Parana today and into tomorrow, before shifting northward into Sao Paulo later this week. This will lead to a nice dry stretch of days following that system for the rest of south and southeast Brazil. That drier pattern may extend into early next week, but heavier moisture is more likely for Tuesday-Wednesday of next week.

The pattern in the next 10 days favors moisture coming out of the eastern part of the southern plains, coming across the lower Mississippi Valley and into the eastern Corn Belt. At least 2 strong systems do this, one early this week and next week. These systems will have plenty of moisture available, but will only hit about a third of the Corn Belt if that.

Hit and miss showers and thunderstorms, mostly in the afternoon for today and tomorrow. A stronger front brings heavier rains with good coverage for Wednesday though Friday. These rains can total half to 2 inches with coverage at 90% of bean areas. We follow that up with a drier trend to finish the weekend and for next week, back to more hit and miss/non frontal derived rains. Temps near normal. Moisture the second half of the week this week will impact harvest.

Watch rains, potentially heavy rains out of two systems, one this week and one next week for the lower Delta and Deep South. While we are not ready to put crop in the ground just yet in these areas, especially after well below normal temps the past few weeks, we will rapidly move toward that through March. Heavy rains are part of a pattern that looks to hold at least into the third week of  March, perhaps longer, and it may lead to a bit of concern about the early planted beans in the Deep South.

Good rains in east TX and southeast OK. However, this southern plains moisture will not work north into HRW areas over the next 10 days to two weeks. We continue to see well above normal temperatures while the dry pattern holds.

Above normal temps bring snow melt to SRW areas, and we see two systems that bring at least half to 1 inch rains to all SRW areas between now and midweek next week. Northern SRW areas have lower rain chances, with 10 day totals under half an inch. 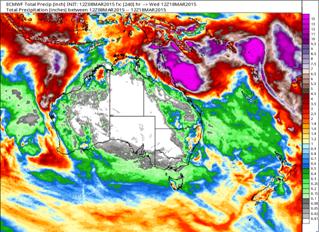 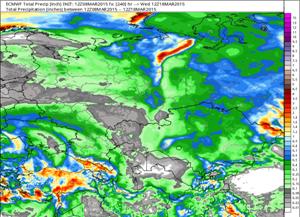 10 day rain totals are looking better in FSW and Russian grain areas. We are not knocking things out of the park yet, but we see good coverage of up to half an inch over large part of Russian areas, close to an inch in Ukraine, and parts of the southern region in Russia may actually push 2 inches or more. Still…eastern parts of the Central Region and the Volga region are looking to stay on the dry side, as well as far western Kazakhstan. Central and eastern Kazakhstan look much better for the period, though, thanks to some rains late this week and early next.

In Australia, the majority of the Wheat areas stay very dry over the next 10 days. However, we are seeing some better rains late in the period in Western Australia, and especially in eastern NSW…where we can see good rains with a front toward midweek next week.