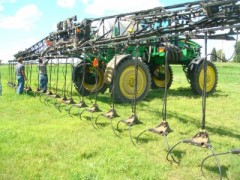 This planting and growing season was flush with Mother Nature challenges, but it created plenty of opportunity to learn for those ag researchers who dealt with the same problems in their plots. Practical Farm Research is a staple at Beck’s Hybrids, and the program director, Ryan McAllister told HAT their research adjusted on the fly this year with the wet spring and early summer.

“We came in and did some Y-Drop rescue applications of nitrogen,” he said. “We did some late season foliar feeds trying to just get rid of some of those nutrient deficiencies that were out there. And if we do that in a year like this then we’re better prepared to make good agronomic recommendations to our growers in future years.” 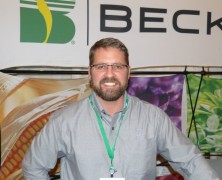 So 2015 was a perfect year to learn what works in protecting nitrogen. McAllister said you would expect nitrogen stabilizers to pay more this year than in other years, and their studies confirmed that.

“Over the last two years we’ve had two products rise to the top and that would be Agrotain Plus and Instinct II. Those two have really risen. This year Agrotain Plus averaged a 14.3 bushel increase and over $30 an acre return on investment. Those are the things we’re looking for, more ROI than we are bushels, that’s really what matters. So stabilizers paid additional, nitrogen paid. So when we think about that we’ve got multiyear data, multi-location data as well, on nitrogen rates and timing. The one thing we saw this year that did not change from previous years was the split applications of nitrogen paid so putting at least 30 units of N down whether that be 2 X 2 or down with some dry fertilizer and coming back between V3 and V6 that’s your highest net return.”

Based on trials this year and historic averages, McAllister says 180-185 pounds of nitrogen should be considered the base, moving higher from that level based on what the weather is. Listen to the HAT interview to learn about spring recommendations:Ryan McAllister-Becks PFR update

The new book documenting this year’s PFR trials will be available at beckshybrids.com this week and goes in the mail to farmers the first week of December.