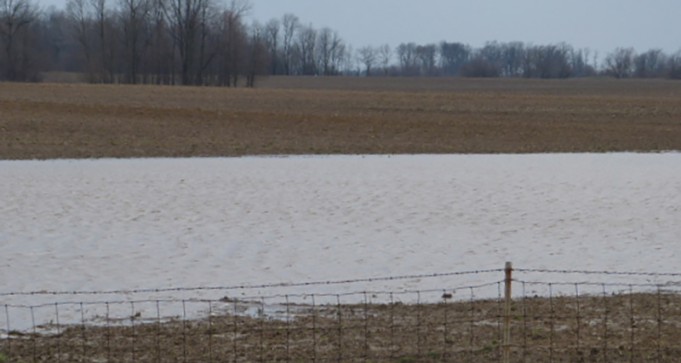 More Wet and Cold Weather Ahead for July

With many Indiana farmers and communities experiencing some of the worst flooding in decades, the prospect for relief is not good. Not only is the short term forecast full of more rain but the long term outlook for the coming month holds out little hope for relief. Purdue economist Chris Hurt says the June weather has caused close to $300 million dollars in crop damage in Indiana; and that assessment, made on Friday, may already be outdated as more rain caused more flooding and crop damage over the weekend.  State Assistant Climatologist Ken Scheeringa says July will hold much of the same. “I do not see significant improvement in July,” said Sheeringa. “Perhaps a little less rain, but I think we will continue on this wet track and there will be more rain in the future.”
He said the below normal temperatures and lack of growing degree days that have slowed crop development are also likely to continue during the critical period of corn pollination, “With the cooler temperatures and cloud cover, it will be tougher to get those growing degree days accumulated.”  Scheeringa added this could become a serious concern later in the season.

But not all of Indiana has been impacted the same way. In fact, Scheeringa says some parts of the state are too dry, “Southeastern Indiana has been dry this spring; and, in fact, Kentucky is currently in drought.”  He admitted it is unusual, but not unheard of, to have droughts and floods at the same time. He stated that the cool summer does not correlate with the likelihood of an early frost.

In the short term more heavy rain this week. Hoosier Ag Today chief meteorologist Ryan Martin says, “This week, we have 3 more systems coming through, and then at least 2 next week. And there is little time in between for dry down. If there is any silver lining on this situation, though, it would be that we are looking at significantly lower precipitation totals out of each event coming forward, and therefore we should not increase our oversaturation situation. Right now, we look for the rains that come to be matched fairly closely with the evaporation potential of the days in-between. So, there is at least that. However…that also does not mean we are looking at any kind of “net drying” anytime soon.”   Check the weather page for a more detailed forecast.