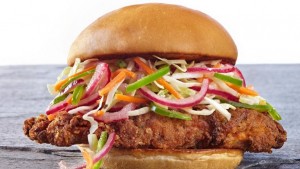 A new year is a time to reflect on the old and set some goals for the new. Judging by the ads in the box store sale papers, a lot of people are setting goals involving more exercise and healthier eating. These are not bad goals, but are ones that too often don’t last more than a few weeks. Yet, if the past is any indication, we will see some changes in our diets in the new year.  We don’t have to look any further back than 2015 to see that several food fads had us eating different foods than we did in 2014.

In 2015, breakfast became an all-day meal.  When McDonald’s started serving a breakfast menu all day long, sales soared. Breakfast restaurants started popping up and did good business all hours of the day. Part of this may be because of the popularity of bacon. Despite the bad and unfounded rap the World Health Organization gave bacon, bacon-flavored foods multiplied like crazy in 2015. Bacon even made the leap from food items to non-food items, including bacon-scented boxer shorts. Unlike mesquite, which was the fad flavor in 2014 but has all but disappeared from store shelves, bacon’s popularity shows no sign of slowing.

Kale was “the” vegetable at start of 2015, but its time in the spotlight has passed.  It’s not even the most “nutritious” vegetable you can buy per ounce. In June, the CDC ranked 47 of America’s most common fruits and vegetables. Watercress, Chinese cabbage, swiss chard, beet greens, and spinach all blew kale away.  Yet, the popularity of kale in 2015 points to a trend we will see growing in 2016. Simpler food, less processed foods, and foods with fewer artificial additives are trending. This is different from organic foods, which are sometimes highly processed and contain a variety of additives, albeit organic.

The organic scene continues to evolve and is looking more and more like the “big ag” it likes to despise.  Organic fast food may be a trend in 2016. In November, The Organic Coup became the country’s first USDA certified organic fast food restaurant. The California-based eatery, which has plans to expand throughout the state, is likely the first of many restaurants vying for that special certified organic seal.

Another food trend we will be hearing a lot about in 2016 is one not based on  popular demand, but rather on the dictates of environmental activists. At the climate change conference in Paris last December, there was a lot of talk about eating “sustainably.” Exactly how you define sustainable and what eating sustainably means varies greatly depending on which wacko is talking. It is safe to say, however, that bacon, breaded tenderloin, and chocolate cream pie are not on the list.  One thing that is on the list is pulses. What are pulses? Dried peas, edible beans, lentils, and chickpeas are the most common varieties of pulses. Pulses are very high in protein and fiber and are low in fat. Like their cousins in the legume family, pulses are nitrogen-fixing crops that improve the environmental sustainability of annual cropping systems. This is what makes them the poster child for the sustainable agriculture movement which wantsAmerican farmers to grow more of these and American consumers to eat more of these. “Eat for the planet,” says Robynne Anderson, of the International Agri Food Network. “What we eat sends a signal to the supply chain and helps create a more sustainable and healthier future for the world’s people and the planet.”

So, as you begin the New Year, consider what changes you will be making in your diet. Just remember it is your diet, and you are ultimately responsible for what you eat. Keep in mind that not everything that tastes good is good for you and that something someone on Facebook says is bad is not necessarily bad. As nutritionists have been telling us for decades, a balanced diet is the best as is everything in moderation.