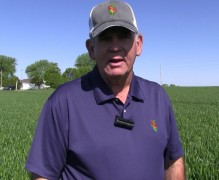 While planting season for Indiana’s corn and soybean crops has hit a delay in many areas, one crop in the state is progressing through its season and is still on target for timely harvest in late June and into July. Bill Mullen, Director of Agronomic Services for Seed Consultants, says winter wheat is coming along.

“There’s a good chance with help from Mother Nature that we could see this still coming off around July 1st.”

And if the wheat harvest will be followed by double crop soybeans, Mullen said “I encourage them to go ahead and take that wheat off at 18-20% moisture and put it through the dryer. It doesn’t cost that much to dry. When we take it off at 18-20% that’s really the time for the best quality of the grain, and that’s what the millers want.”

But the winter wheat fields have been affected by the cool and wet spring too. Disease has crept into the crop. 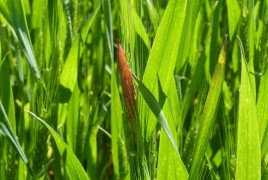 “There’s powdery mildew out here. I see some Septoria leaf blotch and stagonospora nodorum, and these are basically leaf diseases. If we have wet, cool conditions these diseases are going to move their way up from the bottom and work on the flag. The spores will basically move.”
HAT shot video with Mullen Wednesday in a Wabash County wheat field. He said some are already spraying in the south and the field we visited might be ready for an application in about a week.

“When we’re just getting to that point of the anthers coming up from the middle of the head, that’s the time to go ahead and put on Prosaro. At the same time we put it on, we need to go ahead and include an insecticide application to control cereal leaf beetle because it will work on the flag leafs as well.”

See more in the HAT video from Urbana, Indiana.