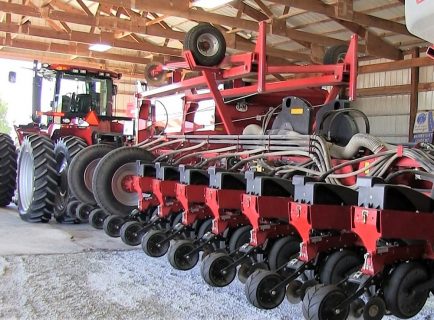 Three percent of the Indiana corn crop is planted according to USDA, 35 percent behind last year’s pace. And the problem is farmers are not currently rushing to the fields to start the catch-up process. It’s still too wet in most locations, and in southwest Indiana the best-case scenario is planting by the 15th of May.

“Sunday maybe at best, if we just had perfect weather,” says DEKALB Asgrow technical agronomist Matt Parmer. Perfect weather is not in the forecast, but Parmer doesn’t want farmers to get too hung up on planting dates.

“Sometimes we have to remember the earliest planting start we ever had came in 2012 and that was a disaster year for most of us,” he said. “So we’ve planted a lot of good crops in the month of May. We just need to string together a good week to be able to do that.”

His recommendation right now is to stick to your original seed plan but start putting together contingencies just in case planting is delayed to late May.

“Some of those key characteristics that I look for is heat and drought tolerance with a hybrid, and disease tolerance specifically around gray leaf spot and southern rust tolerance. And the one thing I really caution farmers about doing is sometimes they really want to shorten up their maturity dates. But often times that pushes them into hybrids that are not well adapted for the area, or can’t take the additional heat or disease, and they actually end up sacrificing a lot of bushels just to get that extra point of dry down.”

And with later planting dates and later pollination, Parmer is concerned about additional disease pressure this season. He also suggests considering a more conservative approach on planting populations for a late planted crop that will need to be able to stand for a late harvest.