USDA is predicting record yields for Indiana corn and soybeans this season. Chris Lehe farms 5,000 acres with his father, Representative Don Lehe, his uncle and cousin in Brookston, Indiana. He says his soybeans are looking good.

“We did have some issues with some volunteer corn, but it’s not terrible. Overall, I’d say right now, soybeans are looking pretty good.” 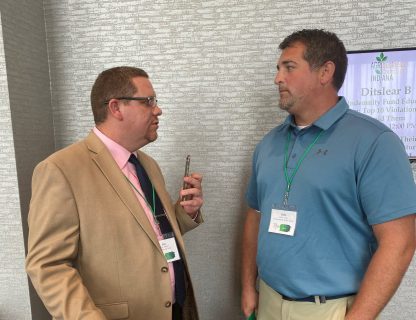 Many farmers I speak to in this part of Indiana think their soybeans look ok enough, but they’re very excited about the potential of their corn, saying this could be the best crop they’ve ever raised. As for Lehe, “Maybe not quite as optimistic.”

“I mean, it does look very good. We raise a lot of popcorn and we could use some water right about now. It’s been a while since we had a good rain where we’re at. Some of the popcorn has started to turn already, and I think a lot of that has to do with the heat and the dryness we’ve had over the last couple weeks. But everything looks pretty good. I’m hesitant to be that optimistic just because I guess I’m more of a ‘cup half empty’ type of person, but I think, overall, it’s looking pretty good.”

Lehe did get a little bit of rain in White County late this past week, but he says he could certainly use more.