The way food is being marketed and sold to consumers is changing, and this will have an impact on farmers and food producers. The purchase of Whole Foods by Amazon is just the beginning of a revolution in the food retailing industry. According to Richard Feinberg, professor of consumer science at Purdue, “It is difficult to overstate the impact that this is going to have in the grocery industry.”

Feinberg says Amazon has the ability to deliver food to people quickly, no matter where they are. Amazon brings a technology and distribution ability that no grocery retailer has. This will allow Whole Foods to do what it does, but better and more profitably. Grocery chains like Kroger, Target, and Wal-Mart are not ready for what Amazon brings to the table with the new and improved Whole Foods. 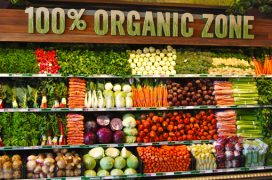 With the purchase of Whole Foods, Amazon will now be able to do that with the unique food products Whole Foods has.  Whole Foods is a chain that does not sell GMO food products and stresses organic, antibiotic free, and less processed food items. Amazon will now have the ability to offer and deliver those kind of products anywhere.  “Whole Foods currently has 430 stories, but after the acquisition, they will have 350 million stores because they will be on every desktop,” Feinberg says.  About 50 percent of U.S. households have an Amazon Prime membership. Prime membership for groceries cements a relationship with a grocery store, and it encourages members who have not shopped there to shop in Whole Foods.

Feinberg says other retailers will be quick to react and adapt, “Other food retailers will have to make changes or disappear.” He added that Amazon’s goal is to be bigger than Wal-Mart in the food business. He predicts this change will come quickly, within the next 3 to 5 years.

Feinberg also says that Amazon has a test store called Amazon Go in Seattle that is displaying how Amazon does groceries. Two features are significant, “Customers swipe their Amazon Prime Card when they enter. When they take something off the shelf and put it in their cart, it registers in their account. If they put the item back it, takes it off their account. When they walk out of the store, the payment is instantaneous. No more waiting to check out, which is the biggest complaint that consumers have of grocery stores.”