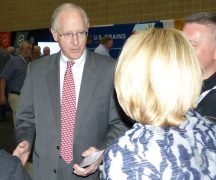 If you pay attention to national politics you know that House Intelligence Committee Chairman Devin Nunes from California has stepped down from heading the probe into Russian interference in the 2016 election. His replacement just happens to be House Agriculture Committee Chair Mike Conaway. Will Conaway’s work on a new farm bill will be hurt by his new, high profile responsibilities? National Farmers Union President Roger Johnson isn’t quite sure.

“Chairman Conaway’s staff has said they don’t expect this to have any impact on the pace of the farm bill,” he said. “We’re going to have to give this probably a few weeks, maybe a month or so, before we’ll really know the amount of time that it’s going to take out of his schedule.”

Certainly, the investigation will take time, and can only mean an increased workload for Conaway.

“I do expect that this is going to increase Chairman Conaway’s workload and take some of his attention. There’s no question about that. he happened to be the 2nd ranking on that committee (Intel) so it would naturally fall to him as soon as Chairman Nunes stepped aside.”

Conaway issued a statement that he takes his new role with “the utmost seriousness,” but stressed that role is only temporary.

Yet, leading the Russia probe puts Conaway in the national spotlight, compared to the low-profile job of leading the Ag Committee. It would seem to further complicate a farm bill process already disadvantaged by the much-delayed confirmation of Sonny Perdue as Ag Secretary.