What Will We Do with Alll This Corn?

The 2017 corn crop just keeps getting bigger. The question now is: what are we going to do with all this corn? The USDA report released on Thursday raised the average corn yield 4 bpa and pushed the overall size of the crop to 14.5 bb.  As a result, corn and soybean prices dropped sharply.

Finding demand for this crop becomes an even bigger issue. Chris Novak, with the National Corn Growers Association, told HAT that stimulating demand for corn is the top priority of his organization.

Tom Sleight, with the U.S. Grains Council, is optimistic about improving grain sales, especially to Korea and China, “The President was warmly received in Korea, and our relations are good as we begin reworking a Korea Free Trade Agreement.” Sleight said the President made progress on this visit to China, as a value added tax on DDGs was eliminated.

Sleight says Ted McKinney, USDA undersecretary of agriculture for trade, is making progress in getting more US grain into India, “Ted McKinney is a great advocate for trade. He has hit the ground running since his first day at USDA.” Sleight said McKinney’s recent trade mission to India helped make progress on a number of trade issues including ethanol and dairy. 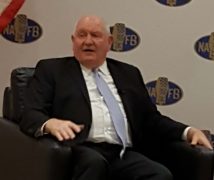 But, challenges remain. Sleight said the current state of the NAFTA negotiations is a good example of how important it is that the US is aggressive, yet consistent, on ag trade. Secretary of Agriculture Sonny Perdue said, at a press conference with Farm Broadcasters in Kansas City on Thursday, that he remains optimistic there will be a successful outcome to the NAFTA talks. “The President knows how important trade is to agriculture,” he stated and added that he has had some “very candid” conversations with U.S. Trade Representative Robert Lighthizer on the issue of trade and NAFTA.