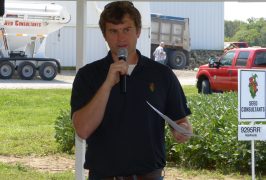 Midwest weather has been cool lately, cool at night with temperatures dropping into the 50’s, and daytime temperatures rising to only the 70’s. Growers have been asking if this could add days to the growing season since the accumulation of growing degree units is now lagging behind the normal.

Product manager at Seed Consultants told HAT at their Ohio headquarters field day, “there are estimations that in certain areas we’re as much as 150-200 heat units behind. That may extend the growing season and put harvest a little later,” he said. “We will possibly see an extended grain fill with that, and we could see some deeper corn kernels as a result of that extended grain fill, but we also could see some wetter corn at harvest when we start to get out into the field because it’s going to take us longer to reach that required growing degree unit for physiological maturity this fall.”

But, growers may be tempted to start some corn harvest purely to get corn shelled while potentially weak stalks are still standing.

“We’re already seeing some signs of nitrogen deficiency in our corn plants,” Hutcheson said. “We’re starting to see the deficiency show up on the leaves where we’re getting the triangular shaped yellowing that starts at the tip and words down towards the stalk. When we pull back husks on those plants we see some stunted ears and some tip back on the ears. The concern with that is, as the corn plant tries to fill out the ear with the nitrogen deficiency, we’re going to end up with cannibalizing the stalk in order to fill out that ear.

He said that means the corn plant effectively weakens its own stalk leading to standability issues. So, Hutcheson says growers should walk their fields looking for signs of this occurring in their fields. Those will be the first they will want to harvest, in a year that keeps on dealing the hurdles.

For an update on corn and soybean crops, check out the HAT video with Hutcheson.