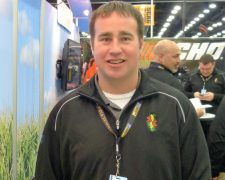 Unseasonably warm weather continues much of this week here in Indiana and there will be some early-week minor rains followed by a couple of days of sunshine and then more rain at the end of the week. In a section of Indiana hampered by rain a year ago, soil moisture is elevated again this year. Southeast Indiana seedsman Todd Jeffries of Seed Consultants is located in the Batesville area.

“We’re pretty wet down in the southeast part of the state for the most part,” he told HAT. “It’s a little bit dry on top but you don’t have to go very far down to find flat out mud. Even though planting is coming up quickly we still have plenty of time to get the ground perfect.”

He said there was a lot of rain on that same ground much of last year.

“I think it started raining last February and didn’t quit until November. You don’t have to go very far from where we were for things to be dry throughout the summer, but we had plenty of moisture.”

Jeffries talked about corn and soybean rotation decisions approaching the 2017 planting season. With talk about switching some corn acres to soybeans this year, he explained some farmers in his area will resist that simply because of the conditions a year ago.

“We’re seeing a little of the switching going on,” he said. “It’s not drastic though. I know in southeast Indiana we were really heavy on beans last year just because we couldn’t get the corn planted, so I have a big chunk of guys trying to get back to their normal rotation. In the end agronomics over economic typically works out best.”