Indiana Farm Bureau delegates wanted change to their policy book concerning portable storage trailers being considered actual facilities. After much discussion, adjustments to the stated policy were made last weekend at the delegate meeting.

During discussion one delegate described the situation of three mini bulk storage containers on a one-axle trailer. Jeff Cummins with INFB explained, “Essentially that renders it immobile, so the Office of the State Chemist is saying, OK, you can’t move that. That’s pretty close to permanent. That’s a facility. We’re going to call you a storage facility. And the state chemist is already considering creating or increasing the exemption for the amount of gallons you can have temporarily on your farm and not be labeled a storage facility.”

Questions were then asked if the number of gallons should be addressed or a specific time span. 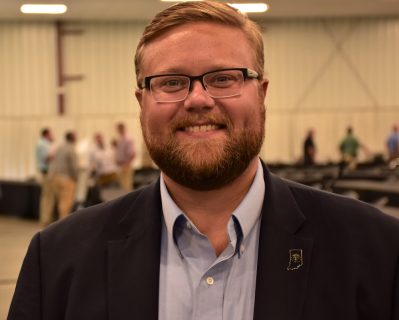 “Do we need 45 days versus trying to get up to 10,000 gallons? The Office of the State Chemist is considering raising that exemption to 10,000 gallons. But if those three containers that that guy had on the trailer could hold theoretically 12,000 or 15,000, he’d still be over capacity because they’re not really looking at what you truly have in there. It’s what you could have, so he could still potentially be in a violation.”

Delegates landed on putting a time frame of 45 days allowed for temporary on-farm storage in the policy book.

“And that gives guys the time to move it and get it out, and they’re not really keeping it around for much longer than that anyway,” he said. “We want to create some flexibility without creating additional environmental risk, and so I think this short window of time can probably do that.”

And Cummins work promoting the policy now begins right away.

“The Office of State Chemist is planning to form a working group. That probably will kick off at the next meeting of the Fertilizer Advisory Board on Friday, September 9th. I will be there, and I think a couple of the guys from Warrick County will be there and we’ll probably call together some of our policy advisory group members to make sure they have some input, maybe the production ag or maybe the environmental policy advisory group. But we will probably call those guys together to get some input on what exactly that needs to be. At least we have a framework now in the policy book that says, here’s kind of what we think we’d like to achieve. Let’s see if we can get that done in the working group.”

Cummins told HAT he was pleased with the guidance added to the policy book and optimistic of a positive outcome with the Office of the State Chemist. That’s an office Farm Bureau works with very closely.