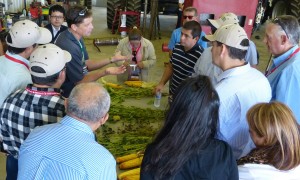 Soybean buyers from around the world were in Indiana last week for visits to farms and agribusinesses and to attend the Global Trade Exchange in Indianapolis, hosted by the U.S. Soybean Export Council (USSEC) in conjunction with Indiana Soybean Alliance. Soybean signing ceremonies were conducted to make commitments of U.S. soy purchases official.

ISA president Joe Steinkamp accompanied one group of buyers on their central Indiana tour which included a stop at Mike Beard’s Meadowlane Farm near Frankfort. 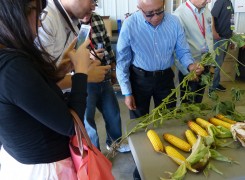 “We’re getting ready to grow a big crop of soybeans and we need the export market to be strong,” Steinkamp told HAT. “So we wanted to show these buyers that we have a great crop growing and we’re growing high quality, sustainable beans.”

Belinda Pignotti is the South American representative for USSEC who had a team of 30 buyers with her from Mexico, Costa Rica, Peru, Venezuela, Colombia and Ecuador. 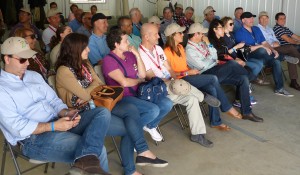 “They’re very good customers,” she said. “From Colombia we have one of the two largest animal integrators that are here and the largest importers of U.S. soy from Colombia. Although we have all of our competitors in South America we still keep the market going on. It’s important for our customers to see how sustainable U.S. production is, which is something we are promoting a lot. They can see it with their own eyes and not just reading from our own articles.”

Ed Ebert, Sr. Director of Grain Production and Utilization at ISA told HAT the exchange was a big success. 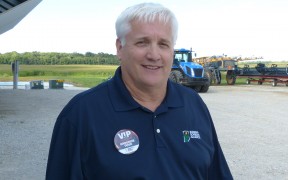 “I think it was a fantastic success with a lot of discussions, a lot of buyer interest in developing relationships while they were here. And certainly renewing our old acquaintance with some of the commercial people that we met while we were in Colombia has really tied that trip together for the Indiana Soybean Alliance for sure.”

He added there has been an uptick in soybean sales to China and around the globe too. Events like the exchange help foster a continuation in the sales trend and an improvement to the soy industry balance sheet.

Additionally, more than a dozen Chinese representatives were in attendance at the Global Trade Exchange. The U.S. Soybean Export Council connects U.S. soybean farmers with opportunities to improve human nutrition, livestock production and aquaculture. This mission is accomplished with a science-based technical foundation and a global network of partnerships including soybean farmers, exporters, agribusiness and agricultural organizations, researchers and government agencies.