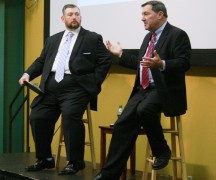 Monday as expected a World Trade Organization arbitrator issued the report on the level of retaliation that Mexico and Canada can request in their dispute with the United States over country of origin labeling requirements, known as COOL. The U.S. House has passed a repeal of the COOL program for beef and pork, but the Senate hasn’t moved on COOL. That could be changing soon. At a town hall Monday at the Beck Ag Center in West Lafayette, sponsored by the Indiana corn and soybean organizations, Indiana Senator Joe Donnelly expressed optimism there will be a temporary fix this week.

“I think that we’ll have country of origin labeling included in the omnibus bill that happens this week and so we’re working to have that done immediately. That will cover both the House and the Senate. That will have a rule in place and it should be in compliance with the WTO. It’s in some ways a little bit of a catch-all bill and part of what’s going to be included in it I think is the COOL labeling.”

With COOL deemed incompliant with WTO standards, the WTO retaliation authorization allows Canada and Mexico to place tariffs on over $1 billion of American-made goods. Donnelly says language in the legislation is designed first and foremost to prevent the tariffs. 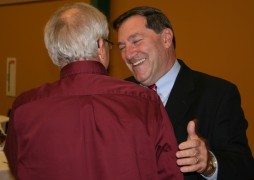 “I actually think that it’s better than 50-50 that we get that legislation this week. We’re talking about an omnibus at the end of the week. We had meetings last week to get COOL language that we can agree on and I think it’s not only going to be in the final legislation, it will be designed so that we don’t get tariffs this year. Then we’ll work with the WTO in years moving forward to try to make it more voluntary. But as of right now our first goal is to prevent our products from being stuck with tariffs.”

Iowa State University economist Dermot Hayes says the average U.S. pork producer currently is losing money on each hog marketed, and retaliation from Canada and Mexico against U.S. pork would exacerbate those losses.