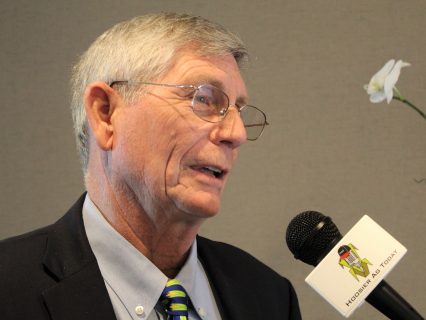 Commodity Classic officially got underway with a welcome reception Wednesday evening. Indiana Corn Marketing Council President Mike Beard from Frankfort, IN told Hoosier Ag Today in Orlando that one of the issues that will keep coming up this week is the possibility that the year-round E15 waiver will not happen in time for the summer driving period because of the recent government shutdown.

“For things to get done people have to show up to work and that didn’t happen in DC. So, we know the opportunity that exists from having that waiver in place. Trump’s behind it, he’s instructed the EPA to initiate it, it just needs to get done.”

Trade is the hot topic here in Orlando. Obviously, Beard is hopeful for good news about China soon, but he said corn growers also want to see the steel and aluminum tariffs levied against Canada and Mexico removed prior to the signing of USMCA, which is still not a done deal.

“We think that we would move forward faster, at least with those two countries, if we drop those tariffs. Don’t forget, there are still retaliatory tariffs from Mexico in the form of pork tariffs, so our pork industry is suffering from not being able to quite as much product as they could.”

Beard is looking forward to hearing from Ag Secretary Sonny Perdue Friday morning to address these issues, among others.

“He’s always pretty upbeat. I’m sure he’ll still be upbeat, and he’ll tell us how we’re going to get there. Big question mark is when.”

In remarks to the House Agriculture Committee today, USDA Secretary Sonny Perdue said the final rule allowing year-round E15 may not be done in time for the start of the summer driving season. Renewable Fuels Association President and CEO Geoff Cooper had the following statement:

“We were very disappointed to hear that the regulatory fix allowing year-round E15 may not be completed by the beginning of the summer driving season. The American ethanol industry and farmers across the country have suffered greatly as a result of former EPA Administrator Scott Pruitt’s efforts to destroy demand for renewable fuels and undermine the effectiveness of the Renewable Fuel Standard. That is why President Trump’s promise last October to allow year-round sales of E15 by this summer was met with such enthusiasm and appreciation, and why the suggestion today that EPA will break that promise represents such a gut punch, if it is indeed true.

“We have no doubt that the so-called ‘RIN reforms’ sought by oil refiners are bogging this rulemaking down. Thus, I reiterate the request we formally made last month to split RIN reform and year-round E15 into two separate rulemakings and expedite the E15 rule. The year-round E15 provisions are straightforward, and there is no reason they could not be promulgated by this summer, particularly as President Trump made the commitment to resolve this red-tape regulatory barrier nearly five months ago. Ethanol plants are shutting their doors and laying off workers, while farmers are facing the worst market conditions in more than a decade—we need EPA to honor the President’s promise to allow year-round E15 now!”