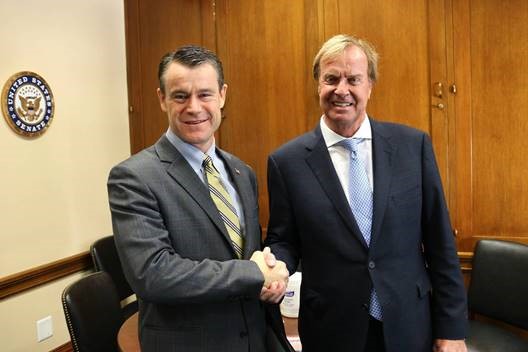 U.S. Senator Todd Young (R-Ind.) on Thursday chaired a hearing of the Senate Foreign Relations Committee during which five nominees were considered for confirmation, including Mr. Kip Tom of Leesburg, Indiana. Mr. Tom is nominated to be Ambassador and U.S. Representative to the United Nations Agencies for Food and Agriculture. Both Senator Young and Senator Joe Donnelly (D-Ind.) spoke in support of Mr. Tom’s nomination.

During the hearing, Mr. Tom provided an opening statement that detailed his Indiana roots, experience, and desire to serve in the position. Watch the video here.

“I would like to extend a special welcome to Mr. Tom from Indiana. Based on Kip’s tremendous experience and status as a fellow Hoosier, I wrote a letter to the President last year recommending that he nominate Mr. Tom for this position. As I said in that letter, ‘Kip has more than four decades of domestic and international experience related to food and agriculture [and is] uniquely qualified.’ I am so glad that you are appearing before the committee today as the nominee for this important position,” said Senator Young in his introduction of Mr. Tom. Video here.

“A native Hoosier, Kip is a seventh-generation farmer and has been active in agribusiness in Indiana for over 40 years…Kip’s agribusiness experience spans the globe. It includes work in North America, South America, Africa, Europe, the Middle East, and Asia…I believe Kip is highly qualified and will be committed to achieving the goals of the United Nations World Food Program and Food and Agriculture Organization as they strive to defeat hunger and to achieve food security worldwide,” said Senator Donnelly in his introduction of Mr. Tom. Video here.

As Chairman of the Senate Foreign Relations Subcommittee that oversees the United Nations and its agencies, Senator Young wrote the President on August 9, 2017, and recommended that Mr. Tom be nominated for the position.